I’ve got an amazing trip to Europe planned out that they’ll sing about in ballads… and it’s only 23 days away!

Never having been on that continent, I don’t really know what to expect other than what I’ve read about. What I do know is that once this trip is under my belt, I’ll be at three continents down with four to go! 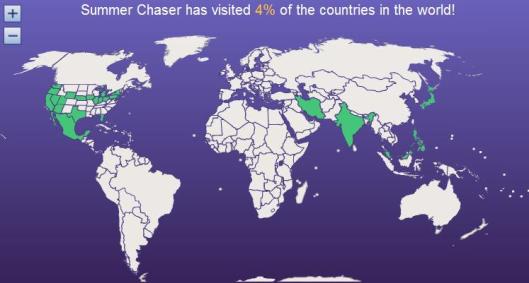 So it's a work in progress, alright? I know this one girl who has never been outside her birth city...

The voyage will commence in jolly good ol’ England and finish in the “Venice of the North”, the global city of Stockholm; whilst everything in between will be completely flexible.

We’ll be flying into London, spending a day or two to get our bearings while we see the sights and sounds. Afterwards, we’ll be renting a car and driving *under* the English channel (I know, right!?) towards Paris, which they call the City of Light (Even though it isn’t really the brightest city on Earth at night.)

TOURIST TIPS: If you wish to try something like this, be sure to apply for an International Driver’s License. It’s really easy to apply for one and you’ll get it in a matter of days.

Next stop, the Iberian Peninsula to meet some relatives. Then, we’ll cut across France towards the former City-States in Italy: Rome, Venice, Milan, Pisa among others… I expect we’ll spend a lot of time here as there is (relatively) a lot more to see, smell, hear and taste. Just the thought of spaghetti, pizza, and lasagna is making my appetite file a complaint for not flying there right now.

And then, we go North to Switzerland and Germany. I’m excited to meet an old friend I haven’t seen in more than a decade. She and I will have to set aside some time to catch up on everything that’s gone on.

This leg of the journey will be really interesting for me. Have any of you seen the movie A Fish Called Wanda? Remember the effect the Italian or the Russian language had on Jamie Lee Curtis’ character? Well… for whatever reason German has a similar effect on me, though perhaps a little less… dramatic. Heh, I can’t really explain why or how this came to be. It simply is, but like I said, it will be really interesting.

If there’s still time after all that, I hope to see more of Eastern Europe. I’d like to see Poland and the Czech Republic specifically. We’ll be meeting more friends to show us around town. I’ll have to check with the rest of the group, but I do believe we’ll be at a wine and cheese tasting event.

TOURIST TIP: Traveling with a group minimizes the likelihood of being victimized by criminals. Not to mention being able to save some money by pooling resources and splitting costs. So, find some people you trust and start planning a trip!

Last but hardly least, we’ll be in Scandinavia and hopefully it won’t be too cold. We all know by now how wind chill and I get along, right? The Scandinavian nations are said to have the happiest and most content people people in the world. Their fairly liberal and progressive society is advanced in many ways, quite possibly the closest thing to most people’s idea of a Utopia.

This trip is going to be so awesome that I don’t know if I’ll be able to sleep in the coming weeks! I keep thinking about all the stuff I can start crossing off the bucket list. It should also significantly raise the percentage of the world I’ve already seen.

I’ll be posting my wishlist for this trip soon along with some recommended souvenirs from each country. Stay tuned!

3 thoughts on “Countdown for Europe!”